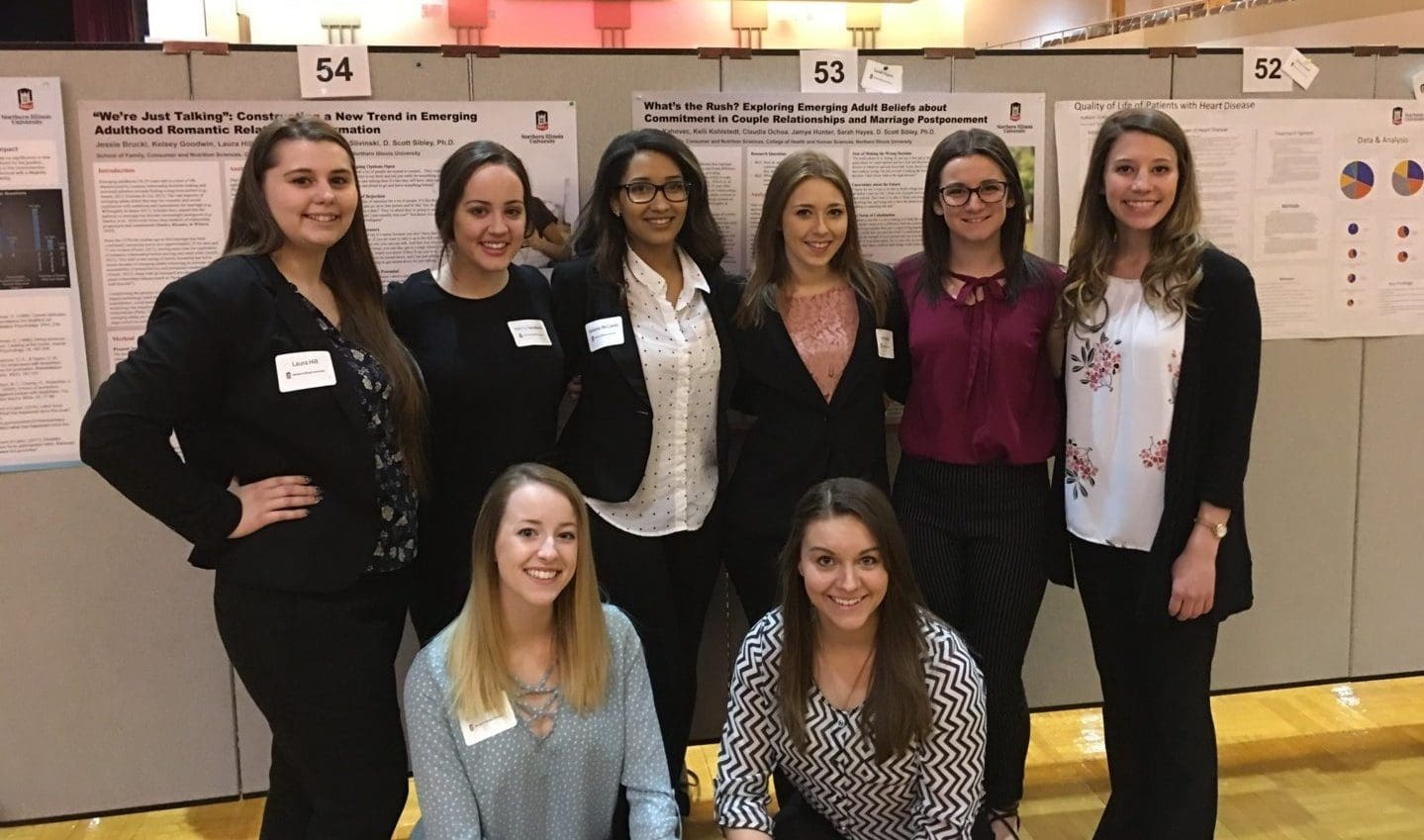 On April 18th eight members of our research team attended the Undergraduate Research and Artistry Day (URAD 2018) at Northern Illinois University to present our research on Pre-dating relationships and the ever-increasing age at first marriage. As a research team we specifically explore decision-making in romantic relationships among the emerging adult (18-29 years-old) population. We find the topics that we study especially applicable to our lives, since we are studying our own age group. Our two poster presentations at URAD 2018 were entitled “’We’re Just Talking’: Constructing a New Trend in Emerging Adult Romantic Relationship Formation” and “What’s the Rush?: Exploring Emerging Adults Beliefs about Commitment in Couple Relationships and Marriage Postponement.”

In collaboration with our faculty mentor Dr. Sibley, we began the process of preparing for URAD by accentuating important findings of our two studies on separate posters. Our research team members generously volunteered their time and came together in several meetings to finalize what we wanted to present at URAD. Five members of the research team worked on “What’s the Rush” and five members worked on “We’re Just Talking” and each member was assigned a section of the poster to present the day of the conference. Once the information on the posters was finalized and the posters were printed we were off to showcase our expert knowledge on commitment and couple relationships. Once we arrived at URAD we signed in, put our name tags on and we were ready to present! In preparation for this conference each group practiced their presentation several times to become more unified, and help dissolve any nerves before the judges made their rounds on the day of our presentations. By taking the time to practice, we were all sound in our ability to present the research we have been working on for the past few months.

The first poster that we presented at URAD 2018 was titled: “We’re Just Talking: Constructing a New Trend in Emerging Adult Romantic Relationship Formation.” We began by explaining how emerging adulthood is characterized by decision making and increased attention towards finding a partner in which scholars have argued that the pathway towards marriage has become increasingly ambiguous (e.g. Stanley et al., 2016). Instead of going on dates many individuals are choosing to engage in pre-dating stage or step we call just talking which has become a distinct stage before beginning a relationship. An additional focus of this research was to investigate how technology (smartphones, social media, etc.) play role in the formation of romantic relationships. As a research team we have presented several studies at conferences regarding “just talking” which you can learn about here, here, and more recently here.

Six coders from our research team analyzed the data that was collected using the constructivist ground theory approach consisting of both initial coding and focused coding. Through this sifting, sorting, and comparative process we identified 12 themes regarding the relationship formation step of “just talking.” Our themes include:

From the themes that emerged we gathered that the “just talking” pathway is heavily reliant on technology. We discussed the use of technology such as texting, Snapchat and Tinder for example and how it makes it hard for individuals to clearly transition into a committed relationship. To conclude our presentation, we encouraged patrons of the conference to be intentional in decision-making regarding romantic relationships especially when it comes to “just talking” behavior. 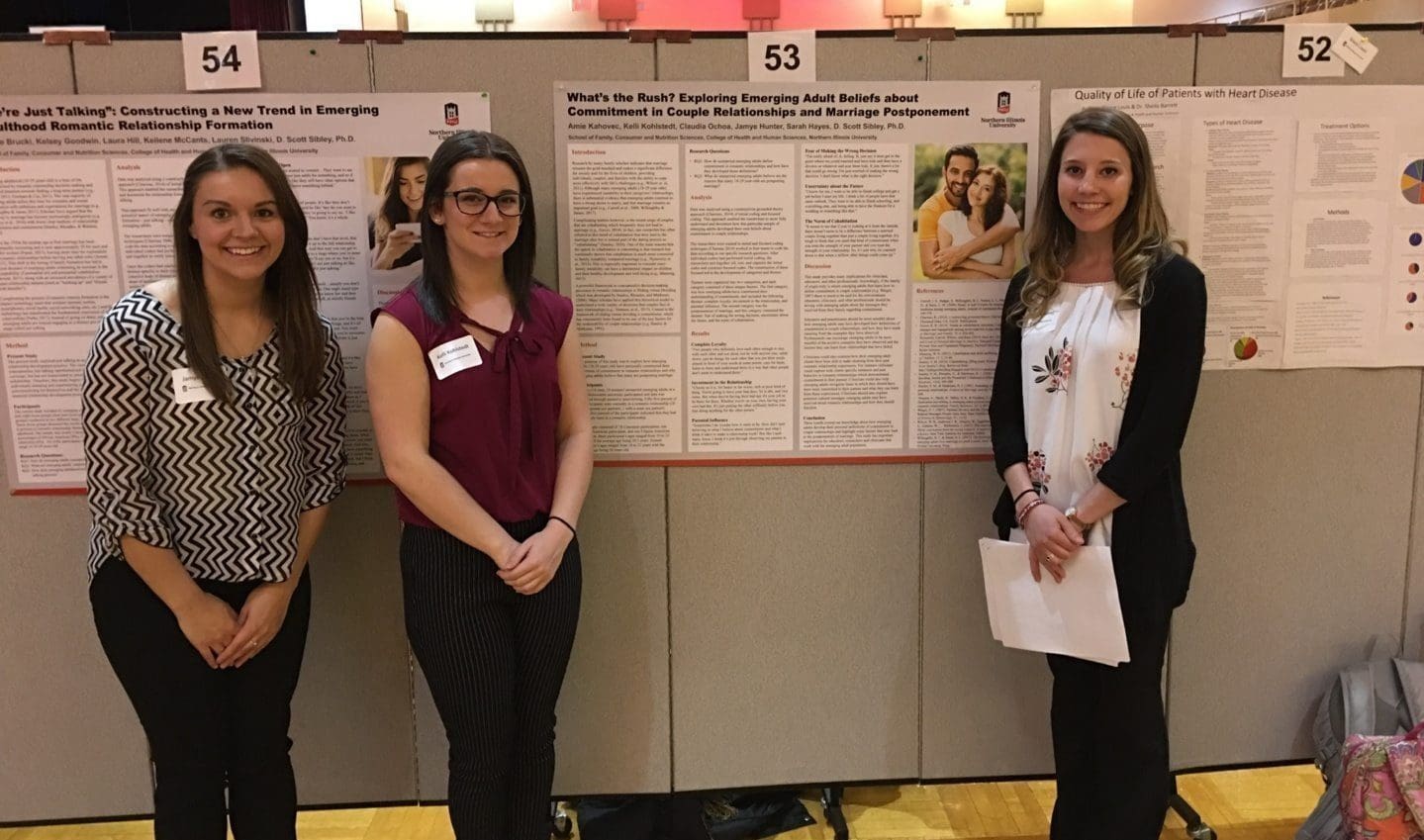 The second poster that we presented at URAD 2018 was titled “What’s the Rush: Exploring Emerging Adults Beliefs about Commitment in Couple Relationships and Marriage Postponement”. We began this presentation by discussing the importance of marriage that still exists among emerging adults. Although emerging adults still have strong desires to marry (e.g., Willoughby & James, 2017), their has been a surge in the amount of couples that are cohabiting and these unions become less likely to be heading to the marriage alter (e.g. Guzzo, 2014). In fact, one researcher has coined the term “Cohabidating” to describe the main reason why individuals are choosing to slide into these commitments versus deciding what is best for the stability of their relationship (Stanley, 2010). Besides cohabitation there are certainly other reasons emerging adults are delaying marriage, which we also discussed in the research presentation.

The participants for this study on marriage postponement consisted of 20 unmarried emerging adults (10 men, 10 women) from a large Midwestern university. The research questions for this particular study included the following:

For this study three coders from our research team analyzed the data that was collected using the constructivist ground theory approach consisting of both initial coding and focused coding. The six themes that emerged were as follows:

It was an amazing experience to have the opportunity to present our research to fellow students, faculty, and judges at the Undergraduate Research and Artistry Day (URAD 2018) held at Northern Illinois University. It was worthwhile to be able to connect with the individuals who stopped to see our poster as well as learn more about their perspectives regarding our research topics. Overall, it was a great opportunity to connect with the community and share what we have been working on as a research team on NIU’s campus.

Hi! My name is Lauren Slivinski. I am a Senior undergraduate student at Northern Illinois University studying Family Social Services. In my free time i like to kayak and take Zumba Fitness Classes. I enjoy being on the research team because it allows me to further connect with new research on emerging adult romantic relationships. 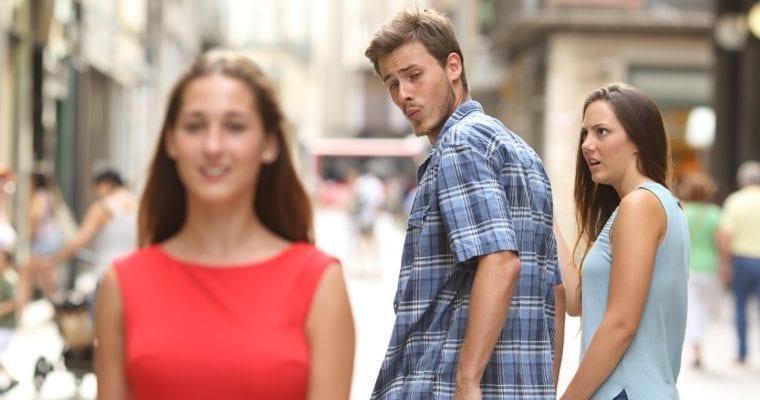 Generally, when one enters into a romantic relationship, above all else, monogamy and fidelity are expected. Usually it is unspoken, but most times it is understood. Yet, as research has shown, infidelity is quite common especially in unmarried relationships. Recently our research team read a […]

Where is This Relationship Headed? When One Romantic Partner is More Committed

Many of us have a difficult relationship story that we could share. Unfortunately one of the traits of many modern romantic relationships is ambiguity. Many people find that they are riding along with a romantic partner that is less committed and invested in the relationship […]

A Review of “The All-or-Nothing Marriage” by: Eli J. Finkel
Illinois Council On Family Relations 2018 Conference